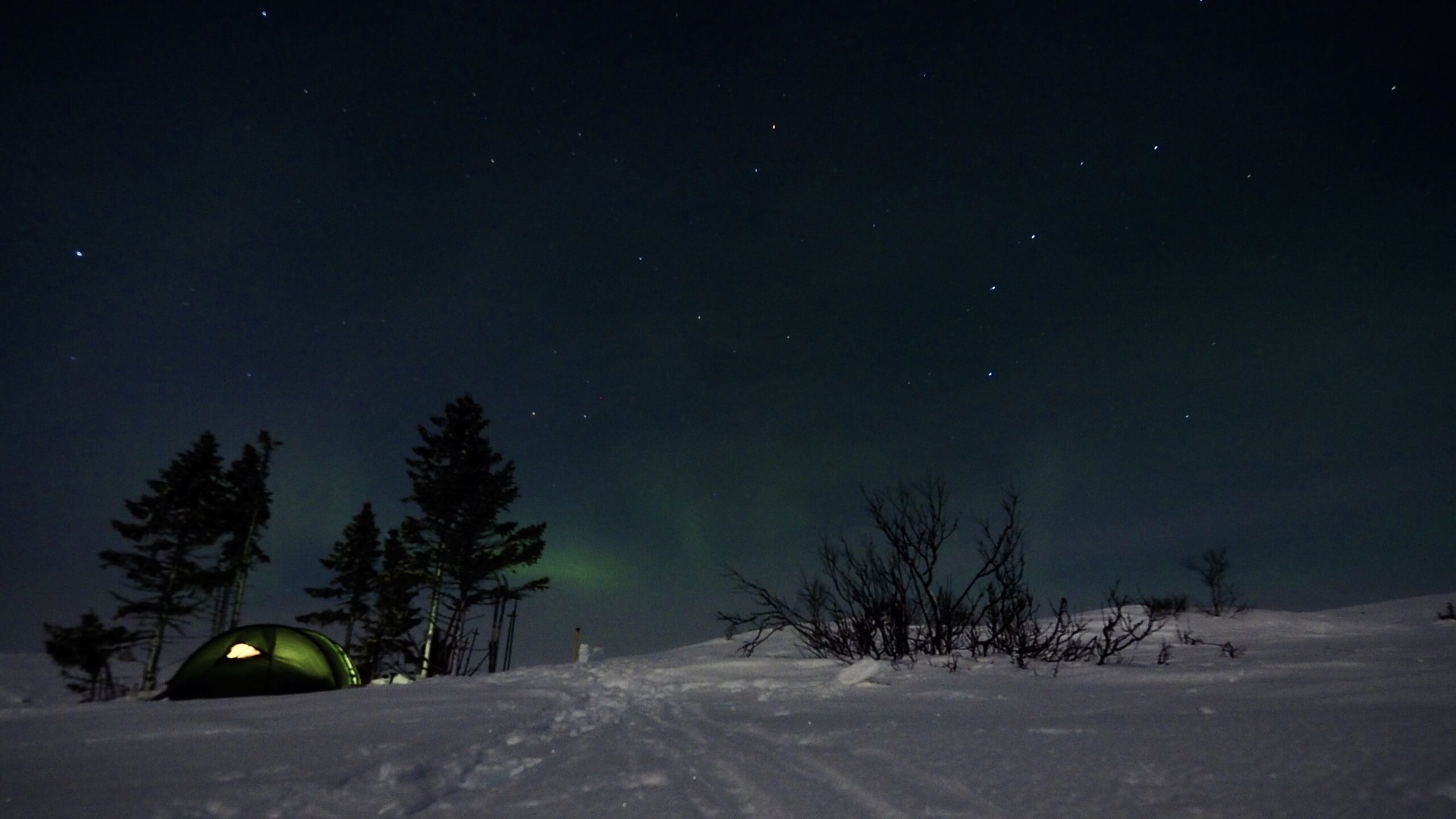 FEBRUARY: A night out under stars and Northern Lights

Burning sunset and dark frosty night under the playful show of Northern lights. That was our February winter escape as our second trip in our project “The Year of Outdoor Escapes” where we committed to spend at least one night per month outside on a mini outdoor expedition.

We decided once again to stay close to our hoods and explore an area called Nordhallsfjällen. A mountain massive going north-west from the famous Swedish ski-resort Åre. A mountain range, luckily for us, not many tourists would pay a visit to, which was another reason why we felt this is a fantastic hidden gem to head to.

We started our tour in cloudy weather which soon changed to snowing. Since it was around zero degrees, the snow melted the moment it landed on our clothes. I had some doubts about our choice of day to be outside.

“Well, this will be a wet trip. Not sure I will enjoy sleeping outside when everything is wet.”

Regardless, we continued our way up to the point we had chosen on the map the day before as our destination. We really worked hard to keep the motivation up, that this will be an awesome trip. I think none of us wanted to admit our disbeliefs and we both tried to convince ourselves that regardless the wet snow, it is great to be outside.

Our destination was a small lake hiding in the heart of the mountain massive. When we reached the tree line, a complete whiteout covered the last contour lines and we ended up seeing nothing but a white milk around us. Well, we set a bearing on our compasses according to the map, counted the distance and checked the elevation regularly to make sure we would reach our destination. It was a good exercise and I must say, something inside us enjoyed it. Probably it was the adventurers within us calling our names and the exploration mode was fully on!

It was not so hard to find the lake actually, and although our plan was to pitch the tent somewhere nearby, due to the fog and wind, we decided to descend down a bit to look for a better place, where the first trees appeared. Even the reindeers didn´t want to stay on the peaks in the bad weather and it almost felt like they were following us down to the tree line. It took us a while to find a nice spot which could give us some shelter from the north wind that would be coming during the night.

While pitching the tent we surprised some ptarmigans (fjällripor) which were hiding close to the trees nearby. With their white feather camouflage they look like big snowballs, it was impossible to see them. Well, they would need to settle with another place for tonight as our tent was already in place.

During the time we worked on our tent, the sun started to fight the fog and the clouds. All of sudden, the sky opened, and our spot was covered with an amazing evening sun. Exactly in front of us we witnessed a magical hour with burning sun disappearing behind the horizon.

Had someone told me in the morning that we would get a sunny evening, I would never believe. The nature decides and we just need to adjust. This time it decided to our benefits, awarding us with a beautiful evening.

Hunger and time for dinner!

When outdoors, you are almost always hungry as you work all the time and your body is burning a lot of energy. I shaped my kitchen bank near the tent from a wind lip and with the warmth on my cheeks lit by the evening sun, started preparing our dinner. With this view in front of me, even a master chef would envy my small “kitchen island”.

Since it was such a nice evening, we didn´t want to zip ourselves early inside the tent. Instead, we stayed outside for a little while, watching the sunset and continued melting snow to our termos and water bottles. The night came quickly and although it was not late, the darkness took over and the stars covered the clear frosty sky. I was finishing up with melting of the snow when I saw something strange.

Between the thousands of stars, something green started shining. It took me a while to realize that this is Northern Light! Absolutely unexpected, absolutely unplanned. We both were staring up to the sky and just observed the playful show till our necks hurt. I could not believe it. It is such a sacred moment when Mother Nature is talking to you with all the power of the universe. I could not speak; I could not move. Just keep looking up and observe the sky. There, I felt such a strong connection with nature and the mountains. There, I felt absolute presence in the moment.

A moment “out of this world, yet fully part of it”.

Although we eventually got cold and were happy to zip us inside our warm sleeping bags, the evening was absolutely fabulous and nothing we would expect when we started our tour in the morning with wet snow and no visibility. The nature has yet again surprised us and decided to bring us the unexpected.

The morning after we packed the mobile home after our standard outdoor porridge breakfast and slowly skied down from the mountain through the old forest. The snow was heavy but our soles light. We just experienced a fabulous night in the middle of nowhere, as close to the universe as you can be.

Let the 2023 be filled with mountain adventures!

Welcome to our outdoor kitchen! Last week we host

Can you feel the snow in the air? ❄️ ❄️❄️
We do! And that is why we have prepared together with @millestgarden amazing winter skitouring experiences!
Looking for an escape to winter wonderland, want to learn new things or improve your skills? Join us in winter! 💥

More info in link in bio 🌟

Welcome to our outdoor kitchen!
Last week we hosted lunch for @klattermusen on their event during their sales meeting at @millestgarden. Suovas, muurikka, warm soup, coffee on fire, fried apples in cinamon were just some of our treats. We were so busy preparing the food so there was no time for pictures. Well, sometimes the best experiences are the one captured only with your senses and taste buds!

Need some inspiration for work event?
Why not having a conference day outside where the mind is open for all the great ideas? Our guests this week had a walk&talk meeting in amazing autumn set up followed by a 3-course outdoor lunch made on stormkitchen.
Our chef @erikmartinhellberg has prepared tasty autumn inspired menu starting with a warm carrot soup, followed by his signature veggie tortellini and finishing with fried apple in cinnamon, served with crumble and vanilla sauce. Such a feast! 🍂
The cooking itself is a great team building activity so everyone had a chance to actively participate and have some fun while preparing the meal.